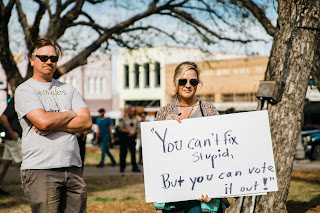 I’m Judge of Elections in my ward/district so of course the election is very much on my mind. Actually, I may be obsessed. If you follow me on Twitter you know that I am consumed with outrage over this administration; trolling Trump has become a favorite pastime. I truly believe exercising our right to vote is critical; it is a calling, a sacred obligation, an opportunity not to be dismissed.

In a recent conversation, I suggested employers should close on Election Day—especially this year when unprecedented voter engagement is expected to result in long waits to vote, causing a disruption in work schedules and obligations. A phenomenon compounded by the social distancing required to prevent the spread of Covid 19—after all we don’t want voting to turn into a super spreader event like the #RoseGardenMassacre. (See, I can’t stop trolling Trump).

Anyway, my suggestion was met with resistance; the argument was made that employers shouldn’t be paternalistic, “parenting” employees by giving them a day off to vote. I can only assume they equated this with driving one’s thirteen-year-old to the 8th grade dance. I (angrily, I admit) countered that many employers gave staff off for Juneteenth in response to the George Floyd protests. Take away Juneteenth and substitute Election Day, I suggested. What is the point of a Juneteenth holiday—aside from appealing to Social Justice Warriors and giving employers points for “taking a stand” against racism?

In truth, because we’ve so diverse in the Black community, Juneteenth doesn’t apply to all of us. For example, my parents are from St Croix, USVI. Slavery was abolished there decades before it was stateside. (St Croix was under Danish rule at the time.) What did people do with the Juneteenth holiday? Probably hung out at home watching Netflix. I believe an Election Day holiday offers the opportunity to bring about change. By encouraging marginalized folks to take action through voting, employers can actually empower employees to act in their own best interest. There is power in voting—we know that because otherwise the Republican party wouldn’t fight so hard to suppress our votes. By voting consistently in every race, we can ensure minority rule does not become the way our country is run.

Every action needs to have a call to act. Juneteenth—what is the call to action? What value does it offer besides a day off from work? How does it make our lives better? With an Election Day holiday, the call to action is simple: VOTE. Already voted? Then be a poll-watcher. Or, drive the elderly to a polling place. Or, knock on doors to get out the vote. The point is you have a day off, a day designed to empower you to drive change, so use it to make America a better place for all of us.

What better way to honor our enslaved ancestors than to exercise the right that was fought so hard for? It’s our chance to honor the horrors they endured and make sure nothing like that ever happens again. We can’t stomp out racism or homophobia, but we can ensure that those in power aren’t afflicted with either.

And speaking of racism I have the same issue with Black Lives Matter—not the movement itself but the name. What is the clear call to action? I think better names would have been Save Black Lives or Value Black Lives because those have a clear call to action and they are not open to outraged assertions that all lives matter—yes, yes they do, you idiot, but we are talking specifically about black lives and the violence and injustices done to them.

As a writer, I know words matter. As a person, I know action and holding ourselves accountable for improving our situation—whatever it is—matters.

Photo by Heather Mount on Unsplash