Showing posts from November, 2017
Show all

This post is an open letter to John McCain—usually this blog is dedicated to the “Writer’s Life.” To an extent it still is since writers are people and, so I tend to write about my experiences, even those unrelated to writing because those experiences are a part of this writer’s life and often influence my writing which though I write fiction, that fiction is, more often than not, informed by reality. So here goes. Dear Senator McCain: I am begging—yes begging , and normally I’m too proud, too arrogant to beg but in this instance, there is too much at stake, too many people at risk to stand on pride—John McCain to change his mind and vote against Trump's tax bill. As Mr. Spock said in one of the Star Trek movies, “The needs of the many outweighs the needs of the one.” We lost our father, a veteran, and a good man to cancer on November 8. He had access to healthcare. And, we did not have to worry about the cost of his care—even if we had to pay out of pocket, we h
Post a Comment
Read more

Saying Goodbye to My Dad 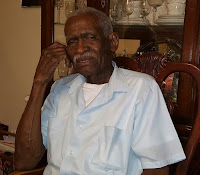 Today at 10:31 a.m., my dad closed his eyes for the last time. When he did, a part of me died with him. I’ll accept your condolences but please check your religion at the door. And don’t talk to me of your God and His wisdom and mercy. Not today. Not today. I believe in God, I do. But not today. Not today. Today, I feel He abandoned me and my father when all I could do was hold his hand and rub his head and tell him I loved him; when all his doctors could do was increase his pain medicine and escalate the frequency with which he received them, and swab his mouth with plain gelatin to make up for the water he could no longer drink, the food he could no longer eat. The first time I, went, alone, to visit dad in the hospital, I arrived in his room while he was still downstairs in radiation. A nurse walked in and asked who I was. “I’m Larry, his middle son.” “Oh, you’re the one who lives in Philadelphia!” “Yes, how did you know that?” “Your dad talks about you. H
6 comments
Read more
More posts