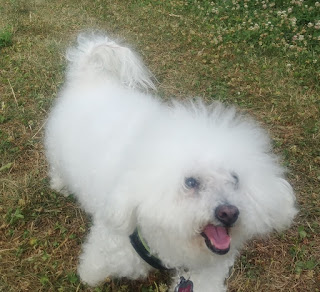 We didn’t know his name when he streaked past us that first night. Tangled, dirty, underweight, he ran from us. When we caught him, I scooped him up in my arms. Scared, hungry though he surely was, he was gentle, affectionate. With no collar and no microchip we had no choice but to hope and wait he would be claimed. He decided we were his home before we decided we’d keep him.

We named him Victor Lorde Riley after a fictional soap opera character. In retrospect it wasn’t a great name given the character herself was by turns alcoholic, schizophrenic and locked in the attic by her stepmother. We called him Riley.

I’ll never forget the look of gratitude in his eyes that first night when we took him home and carefully cut out his mats and the burrs that were scraping his skin. He settled in, claimed a toy and decided he was staying, claiming a spot in our bed and our hearts. No matter how many times a day I left and returned he greeted me at the door with a toy and a wagging tail.

He is the fourth dog we have lost—when we lost my first dog, Channing, we cremated him. I told my husband when I died, to cremate me and mix my ashes with Channing’s. Now we have the ashes of four dogs and one aunt. Poor Stanley is going to need a wheelbarrow to scatter my ashes.

Three dogs lost, each loved, before Riley. Every loss of a dog hurts but in a way telling him goodbye was easy than the others; he was dying, he was ready, and we’d done everything we could. His medical team consisted of a primary care vet, an internist and a neurologist. When he was diagnosed with kidney disease, he refused to eat the prescription food. Our Riley, who ate any and everything. We tried every available option and still he wouldn’t eat. Finally, I located a company in California that had a fresh made prescription kidney diet that was shipped frozen via FedEx every few weeks.

We weren’t the only ones grieving. Our other dog, Atticus lost his best pal. He was visibly sad, sleeping more, eating less. That was perhaps the biggest motivator in beginning the search for another dog. I knew there weren’t many available so I started the search before I was quite ready. We found a dog who had been rescued from a kill shelter here in Philly where he was due to be euthanized. I applied for him without much hope. Before I left the house that day, I stopped by the shelf where Riley’s urn lay. Hey buddy, I said, I’m not trying to replace you, bit we’re all sad and I’ll always love you. I hope you understand. An hour later, the shelter called and said we’d bene approved to adopt, when could we pick him up. I took it as Riley giving us his blessing, his permission to move on. He was always a generous dog. 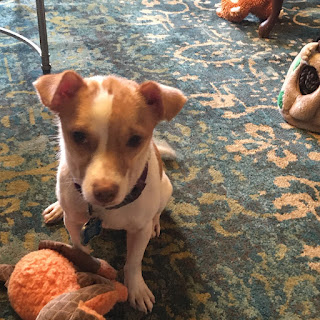 His name was Hank; we renamed him Gatsby—I just couldn’t have a dog named Hank. He’s a three-year-old Chihuahua/Jack Russell mix (rather more Jack Russell than I’d hoped), mischievous and high energy. Is he perfect? No, but he tries to be the best dog he can be. I can’t ask for more than that. And besides, he has Riley’s blessing.