Showing posts from May, 2016
Show all

Other Voices. Other Mansions.

In my Father's house are many mansions: if it were not so, I would have told you. I go to prepare a place for you. — John 14:2, King James Version Having discovered I was gay at a time when gays didn’t have much visibility, by the time I got to college, I was starved for stories about men and boys like me, books that’s showed me what my life could be. I discovered Patricia Nell Warren’s The Front Runner in Penn’s campus bookstore quite unexpectedly freshman year. I read it in a single weekend while my roommates were away at a track meet. Next I read The Fancy Dancer , also by Nell Warren. Then came books by Gordon Merrick, and others whose authors and plots I have forgotten. I remember I was dissatisfied though, because nearly a decade after Stonewall, after gays first appeared on the cover of Time magazine, the movement was still pretty much whitewashed, especially in gay fiction, which was rife with pretty, slim, slutty whiteboys drinking, partying and having lots of se
Post a Comment
Read more 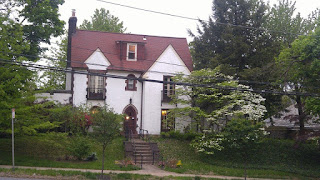 "The Moody House" We had just gotten home on Saturday, when two black women walked up to the kitchen door. Attractive, smiling, there was an openness about them that made me rethink my original dismissive appraisal: Jehovah’s Witnesses . As I corralled the dogs, the older of the two said to Stanley, “Hi. We used to live here. We were hoping we could come in and see the house—” “Oh,” Stanley cried, “You’re Moodys!” They seemed surprised we knew who they were. I guess they don’t know they are practically legendary. In fact, nine years after we bought it, our house is still referred to as “The Moody House.” We’d, of course, heard about the Moodys before. A local realtor, who spoke highly of the family, once told us that when her own daughters had held a party which her mother chaperoned, her mother had called her in a panic and whispered there’s a black kid dancing in the garage with the girls!” Her response? “That’s not a black kid, that’s Moody!” We took t
10 comments
Read more
More posts