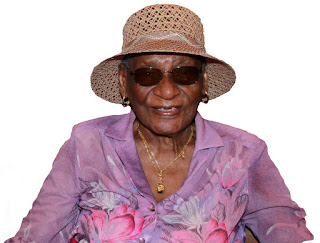 Friday, January 20, 2017 was a dark day for many in our nation. For me it was even darker. Our beloved Aunt died last Friday. So while for many it was “The Inauguration of the Nation’s 45th President,” for me it will always be the day Aunt Terpe died.

Beloved aunt. Those words beggar description. She was so much more than that. She was a force of nature; she was unconditional love; she was a staunch advocate for those lucky enough to be loved by her.

Euterpe Cleopha Richardson was one-of a kind, as unique as her name.

Though, I never formally came out to her, she always knew; she was the first person in my family to implicitly acknowledge and support my gayness. She made me feel it was ok to be myself. She gave me advice, “Never move in with a man; he can move in with you, or you can move someplace together but never move into his place; that way he can never tell you to leave.” And this,” Never give a man a second chance; if he hurt you once, he will hurt you again.”

Whenever I showed up with a new boyfriend, she simply treated him as another nephew.

She read my books. And told her friends about them. I remember I kept ignoring her when she said she wanted to read “Unbroken.” It revealed too much about me, and there was sex in it. I was afraid she’d be appalled. But as I said she was a force of nature so I relented and sent her the book. Then I waited anxiously. She called me up one day in tears. I panicked. “What’s wrong?” I asked. “I never knew,” she said, “how hard you had it growing up. I am so sorry.”

In truth, I hadn’t thought I’d had it any harder than any other gay kid growing up when I did. And I’d certainly never expected anyone to apologize for my experience. Like I said, she was one of a kind.

She told me a story of two gay guys she became friendly with in the early 50s. They were a couple and lived together, most unusual at the time. To keep themselves, and their friends, safe, they often threw parties at their apartment. Aunt Terpe was a frequent guest, the only woman in attendance, the only straight person they felt they could trust. One day she answered the door and the gay guys on the other side quickly stammered, “Oh sorry we have the wrong apartment!”

“No you don’t,” her friend called out from inside the apartment. “It’s Terpe. She’s ok. Come on in.”

A part of me—I won’t lie—a big part of me worries that that fear and need to hide will return under a Trump administration.

When we got married, Aunt Terpe called me up and she congratulated me, and repeated what she always told me, “Live your life Lawrence, live your life.” Then she asked to speak to Stanley. When he hung up he had tears in his eyes. “What happened?” I asked him. Aunt Terpe had congratulated him and told him we needed to make sure we took care of each other—the same things she had told me. Then she had added, “If you hurt my nephew,” I will hunt you down.”

Yep, that was Aunt Terpe—a staunch advocate for those lucky enough to be loved by her.

I went to visit her in the hospital the Sunday before she died. When she saw me she said, “You came. I knew you’d find me!” I knew she was worried about the hospice we were transferring her to so, before I left, I promised I would come back as soon as she got moved to make sure it was ok.

Thursday morning I woke up and made the drive to New York. All that separated us was 117 miles. In my head was one goal: shorten that distance as quickly as possible; on my lips one prayer: Please don’t let me be too late.

I pulled into the parking lot at 2 minutes to 11 and sprinted to the building. She was awake but couldn’t talk. “Aunt Terpe, I’m here. I’m here.” She looked me in the eyes and squeezed my hand to let me know she heard me, knew I’d come as I promised I would.

Later when she fell asleep, I sat crying quietly by her bedside. She must have awakened at some point and seen me crying because she reached out and took my hand and squeezed it with what little strength she had left. And I realized that even as she lay dying, she had tried to comfort me, as she had comforted me, and my brothers, her whole life.

We used to talk on the phone a lot. Still, I worried that I didn’t visit her enough but she insisted I had my own life and my own responsibilities. “I have done everything I wanted to do, went everywhere I wanted to go. Now I can’t do these things. But I have my TV and as long as you boys call once a week, I am content.”

I am content. And that was the other thing about Aunt Terpe. She was always content, always happy with what she had.

Lord, you but lent her to be our happiness.
You reclaim her, and we return her to you
without murmuring, but with a broken heart
—St. Jerome
aunt euterpe grief inauguration Larry Benjamin LGBT