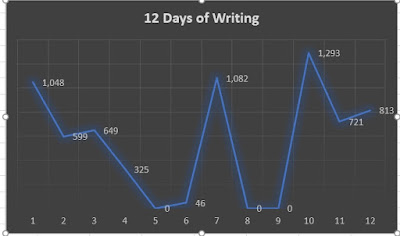 Because of the way Christmas and New Year’s fell this year, I found myself the beneficiary of a nearly two week holiday from my day job. And I needed it, too. Between my commute, the job itself and the people I work with, I was seriously burned out. But because I am not good at being idle. I decided to make my time off a “writer’s holiday.” I’m seriously behind on writing my new book, so a holiday during which I could just write made sense. Of course, I can never just write—we had friends coming for Christmas, so cooking needed to be done, and the house needed to be cleaned. And of course, the dogs needed to be walked—and spending time with them was a priority since we both work all week, leaving them on their own a good bit.

I realized for this writer’s holiday to work I would have to be disciplined—something I am not naturally.  I set two goals for myself: 1) write at least one hour each day, and 2) write 1,000 words each day. Modest goals I know, but no sense it setting goals I couldn’t reach. That would just make me feel like a failure and talk about demotivating…

Realistically, an hour or two was an achievable goal for me. My other goal, the word count was separate to it. So, that hour or two could be used for anything related to the book: research, editing what I’d already written, developing characters, naming them—which can be an ordeal. I read a blog post in which a writer mentioned using a random name generator. I’d never heard of such a thing but that wouldn’t work for me anyway. Each character’s names tells the reader something about him or her. So they often start out named A, B, or C; as I learn about them, they get names.

The word count was again something to shoot for—a ballpark if you will. I know there are writing coaches who recommend sitting down and just writing, then looking back over what you’ve written; goal is to reach your word count for the day/week, etc. That for me is a waste of time. I don’t want to write words just for the sake of counting them. My writing is more organic; it springs from itself—if that makes any sense. And as I’m writing, I’m listening for the rhythms of the words. Thus, each word is carefully chosen to fit. Free form writing robs me of that.

So how did I do? See the chart above. Most days I missed my thousand-word goal but I did write each day. And I loved what I wrote and the story started writing itself. I discovered new characters, one an unexpected ally; I wrote of a first kiss that made my heart sing; one character made me cry. One morning I sat down to edit a single sentence and when I stopped it was 40 minutes later and I had written a key scene that had been eluding me for weeks. And I figured out how to structure the book in a way that made sense for the story.

At the end of my holiday my WIP is just over 31,000 words. I had hoped to reach 30,000. Tomorrow, I go back to my day job and the act of juggling work and life and writing. Though for me, writing is life.
Larry Benjamin WIP writing