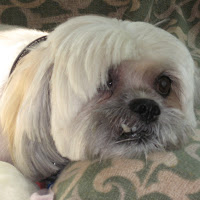 Two years ago today, we had to let go of our precious girl, Coco. She was fighting heart disease and the effects of old age. We knew it was time and she let us know she was ready. Still, it was hard. She wasn’t the first dog we’ve lost—but in the intervening years, grief had lost its edge.

We’d had to put down my first dog, Channing, after an attack by a neighborhood pit bull. For a decade he’d been my most constant and cherished companion, predating Stanley. I was, to put it mildly, devastated. It wasn’t until we adopted Coco that Stanley stopped looking at me with anxiety and inexpressible sorrow. Weeks after we got her, I was talking to my mother on the phone and something she said made me laugh. She paused and said, “You know, after Channing died I didn’t think I’d ever hear you laugh again.”

It was only then that I realized how deep and visible my grief had been.

“She’s gone,” the vet said quietly then discreetly withdrew. I left the room shortly after knowing that if they came for her while I was there, I would fall to my knees, clutching her, still warm, body to my chest and refuse to let go. Instead, I went outside, lay on the pavement, cured into a ball with our other dog, Toby wrapped tight and cried like I would never stop.
Stanley stayed with her in that bright, clean room, the saddest place on earth, until they came for her because he d-said he didn’t want to leave her there alone.

Coco’s ashes sit on a shelf in the library beside those of Channing. And there remains an empty corner in my heart, where she used to sit.

And now two years after her loss, and ten years after we first brought her home, I remain unsure: Did I rescue her? Or did she rescue me.