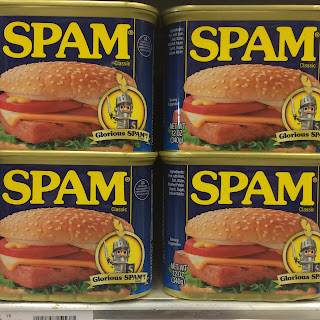 There’s a woman in Germany named Mel on Goodreads who writes wonderful reviews—insightful, and entertaining without giving away too much away. She caught my attention because she has been going through my books and reviewing each one. She started reading Damaged Angels and posting reviews of each story. Her review of my short story “Spam” caught my attention. Of it, she wrote:


Oh my... this one’s a riddle. At least to me. It’s kinda impossible to say what’s real and what not. And while I’m confused, I still appreciate this. In the end it doesn’t really matter what exactly went down here.


Her review (read the full review here)led me to decide I would dedicate this blog post to explaining that story. Spam,” is, in a way,  a story about identity. Identity has been much talked about. First it was gay identity, then transgendered and gender non-conforming identity (though I think gender non-conforming identity has always existed and been talked about). Then, there was the recent fallout over Rachel Dolezal’s identifying as black (June 13, 2015).


I’ve always wondered: when it comes to identity—who are we?—Are we who we appear to be? Or who we believe we are?


Like most of my stories, “Spam” is grounded in experience. When he was in second or third grade my older brother had a friend named Angel. I remember Angel had dark hair and dark eyes and his mother was a school crossing guard. One night when my parents were checking over our homework, they discovered that my brother had written Angel’s name instead of his own on his homework. I remember yelling—“You are not Angel”—and perhaps a spanking. That memory remained with me as I got older; I always wondered what had made Michael write someone else’s name instead of his own. That questioning partially inspired the story which is basically an exploration of identity—how/why we construct who we are.
The second inspiration for the story came from a story my mother told us. When I was a kid, I loved Spam. My favorite meal was our Thursday morning breakfast of Spam omelets (routine is highly prized in my family). I remember once my mother telling me, as a newlywed, she used to make Spam for Saturday dinner until my father complained. After that Spam disappeared from the Benjamin menu until its re-emergence, years later, at our Thursday morning breakfast table. I decided to combine the two experiences into a story featuring Spam. I chose Spam as both title and central element because it is an absurd food and I’d envisioned a story that was part horror, part absurdity.

Billy Howell, an ordinary eight year old boy lives in a “red brick house—in which his mother acted as the lovely flame-haired warden.” His father is a ghostly presence: passive, silent, ineffective.


Billy’s mother, Teresa, mother seems to have no goal other than to hang on to her boy forever, a desire so apparent even Billy notices, prompting him to write in his diary: “It’s true. She doesn’t want me to have any friends. She just wants to keep me locked up here with her. Forever. So that I’ll never grow up and be free.”


Billy dreams of escape and, it is this way madness lies.


When his mother tries to separate him from his best friend, Angel, whom she considers an urchin and a threat, Billy begins to suspect he is, in fact, Angel. He writes in his diary: “Sometimes I feel that Angel and I are the same person. Sometimes I know what he’s going to say before he says it. Other times, when he tells me about growing up in Puerto Rico, I can close my eyes and see what he’s remembering. It’s as if his memories are my memories, too.”


Despite his mother’s refusal to believe Billy is Angel, Billy’s conviction that he is Angel deepens: “I woke up this morning and I understood. I am Angel. Yes, it’s true. I’m Angel. Angel and I are the same person. If you don’t believe me, call Angel. I will answer. Write my name, Billy, and it will come out Angel.”


At this point it seems completely clear that Billy is mad, and the situation worsens, with Billy abandoning both his name and native tongue: “Mother still refuses to believe I am who I say I am. She calls me Billy, but I don’t answer. No me llama Billy. Me llamo Angel. One day, she will accept the truth. ¡La verdad no puede ser negada!”


For me the story, already claustrophobic, becomes horrific as Billy’s mother appears to descend into madness to avoid losing Billy, as evidenced by the story’s closing lines:


“Teresa finished frying the Spam. Walking to the stairs, she called her son to dinner: ‘¡Angel! Venga a cenar ahora.’”


In her review, Mel states, “Okay, I think what is definitely true is that the mother is the worst mother and person ever. She suffocates everyone around her, not only her son.”


Is she the worst mother ever? Is she mad?


How far would you go to validate a loved one’s identity, when what we see sometimes doesn’t match up with the identity they claim, when our loved ones, and strangers alike, seem to demand: Who you gonna believe me or your lying eyes?


My allegorical novella, VampireRising is now available for pre-order.