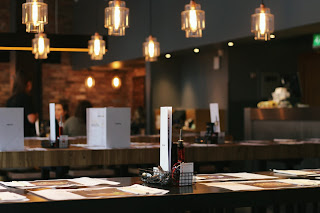 It was my birthday. Actually, my birthday had been three weeks earlier, but Ivy, who was responsible for my birthday celebration, had forgotten, thus my actual birthday slipped by unnoticed. Until today, anyway.

We would be going to lunch at 500 Below, she informed us—a chic new eatery which reached new heights on the Richter Scale of pretension and snobbery. Imagine the St Regis recast in black rubber, copperplate and plastic. They did not take reservations, but when you arrived for lunch at 11:45, the maître d’, would look down from his unreasonable height, over his glasses and down his beaked nose, and peck a message of unwelcome out of your flesh: “Unfortunately, there’ll be a wait of at least forty-five minutes. You can wait in the bar.” He would say this in a tone that was both haughty and mournful; he would say this despite the fact that you could see the restaurant was empty.

The other thing about the restaurant was it was “calorie-wise”—every item on the menu was five hundred calories, or less.

The waiters were hot, though—all bodybuilders in their late 20s. Every lunch there, at least for me, was accompanied by an erection.

“Look at the chest on that one,” Nigel whispered to me. “No way he’s bulking up like that on the measly five hundred calories we’re allowed!”

Nigel’s sexuality was less fluid than altogether ambiguous; I’d given up trying to figure it out. “They probably get all the calories we’re not allowed,” I said. Then distracted by a waiter with a particularly impressive bubble butt, I asked, “How many calories do you suppose are involved in licking his ass?”

“What are you two plotting over there?” Ivy demanded, looking over her menu and squinting at us.

Once, I’d consumed all my allotted calories in pre-lunch cocktails while sitting at the bar waiting for a table. I’d been offered a single stalk of celery with a thin coating of peanut butter, which, apparently, for $16.95, was a thing.

“I don’t get the name,” Barbara the second, who could be bit thick, said.

“It’s a not subtle nod to the menu—everything on it is 500 calories or less: Ivy said.

“Really,” I confirmed, “though it seems more an estimation of your chances of actually getting seated for lunch without waiting forty-five minutes in an empty restaurant—or not having to book dinner reservations four months in advance.”

“Huh?” Barbara the second asked looking up sleepily from her menu.

“When the temperature reaches five hundred degrees below zero—that’s when you can expect to be seated,” I said.

“Huh?” Again, this time laid down her wooden menu, and wrinkled her twenty-seven year old brow in confusion.

“Theus means,” Barbara the first explained in her Harvard-educated tones, “when hell freezes over.”

Among other irritating traits, Barbara the second never swears and considers “hell” profanity.

“You know, King (Diana alarmingly, often referred to her husband by his last name) tried to make reservations for our anniversary. He called three months in advance and they told him they could maybe squeeze us in at the eleven pm seating—”

“Three months in advance? 11 pm seating? Nigel snorted, “They’re in King of Prussia! Who the hell is in King of Fucking Prussia at 11 pm?”

Barbara the second cleared her throat and gave Nigel a disappointed look, before picking up her menu.

Service was slow, and lunch dragged on interminably.

“Crap,” Diana said looking at her watch, “We’re going to be late. TWO will have a cow at the lost billable time.”

“Quick,” Nigel said looking longingly at the remaining apple slice on the appetizer plate, “Think about a client so you can bill the time.”

“If you think a hard enough,” Ivy, munching on a carrot stick, said, “you can bill your lunch to the client.”

Diana sat up straighter. “Bill your lunch to a client? You mean individually? I thought lunch was on you—for Theus’s birthday.”

“No. Theus’s lunch is on me—the rest of you have to pay for your own lunch. I’m not made of money you know.”

I grabbed the last remaining apple slice, and as I bit into it, I vowed to myself, I would announce I’d become a Jehovah’s Witness before my next birthday.”


The characters and events described in this blog post exist only in its pages and the author's imagination.