In a Season of Excess 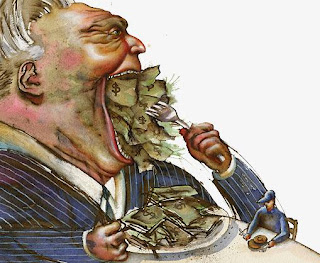 I am troubled by the times we are living in. We have a Trump-driven, GOP-supported tax “reform” bill that is nothing short of a massive transfer of wealth from the poor and middle-class, who comprise 99 percent of the U.S. population to the richest one percent. Over the weekend it was revealed Senator Bob Corker changed his “no” vote to a “yes,” after a tax break that would hand him a windfall of millions was snuck into the bill.

As I ponder the current climate, a season of excess, a world where greed is its own reward, and robbing the poor and middle class to enrich the already wealthy drapes the robbers in gilt-edged robes of glory, I am deeply disappointed. And afraid.

Sure we’ve seen this before, most recently in the Reagan area (who can forget Nancy Reagan wearing red and ordering 4,370 pieces of Lenox china (enough place settings of 19 pieces for 220 people) at a cost of more than $210,000? Who can forget the halcyon days of “Dynasty” and the Carringtons, and “Dallas” and JR Ewing (who did shoot JR?)—a period that gloried in excess: mansions and designers dresses mostly distinguished by over-sized and ridiculous shoulder pads that one could only assume were a reflection of the wearer’s outsized bank account and stock portfolio. Still, missing from that prolonged orgy of excess was the maliciousness, the sheer meanness that characterizes the current administration and its actions.  Amassing more—and ensuring that more remains concentrated in as few hands as possible—has become the noble purpose of the current ruling political party.

Several events over the last year have caused me to re-examine my relationship to money, to things. First our aunt died in January, then our dad died in November. Money could not have saved either of them. When we first found out my dad was dying I asked him if there was anything he wanted. He said he just wanted to spend as much time with us, his family, as he could. Not a trip to Paris, not a Ferrari. Time. With us.

Then I left the for-profit sector after a horrific few years in corporate communications and switched to the non-profit sector, which pays considerably less well but which allows me to feel fulfilled in a way I never associated with work.

Last Saturday we had dinner with a friend we hadn’t seen in a while. She recently retired and was discussing life after work and her new awareness of money. She pointed out she had everything she needed but had to start thinking about what she bought and how she spent money. I could totally relate to that but then she mentioned a New York Times article she’d recently read about a woman who gave up shopping for a year. I was instantly intrigued. I don’t think of myself as a “shopper” but we have a lot of stuff, which I suppose is normal for two gay men of a certain age.

I like books, buy way too many of them…Seriously, we have more than 1,000: signed first editions, art books, leather bound books from The Easton Press, with gilt edged pages and satin ribbon markers, and numbered, limited editions with hand marbled endpapers from The Folio Society.

So, I was intrigued by the idea of not shopping. Our friend sent me the article, “My Year of No Shopping,” by Ann Patchett, Sunday morning and I read it with interest. In the article, Patchett explains:

"At the end of 2016, our country had swung in the direction of gold leaf, an ecstatic celebration of unfeeling billionaire-dom that kept me up at night. I couldn’t settle down to read or write, and in my anxiety I found myself mindlessly scrolling through two particular shopping websites, numbing my fears with pictures of shoes, clothes, purses and jewelry. I was trying to distract myself, but the distraction left me feeling worse, the way a late night in a bar smoking Winstons and drinking gin leaves you feeling worse. The unspoken question of shopping is 'What do I need?' What I needed was less."

I read her words and I thought—Yes, That’s it exactly: I need to buy less and give more. I need to share other capital—time, love, interest, resistance.

And that is exactly what I intend to do in 2018. Revisit this blog to track my progress. In the meantime, you can read Ann Patchett’s thought-provoking article here.
ann Patchett bob corker GOP greed Larry Benjamin nancy reagan tax reform