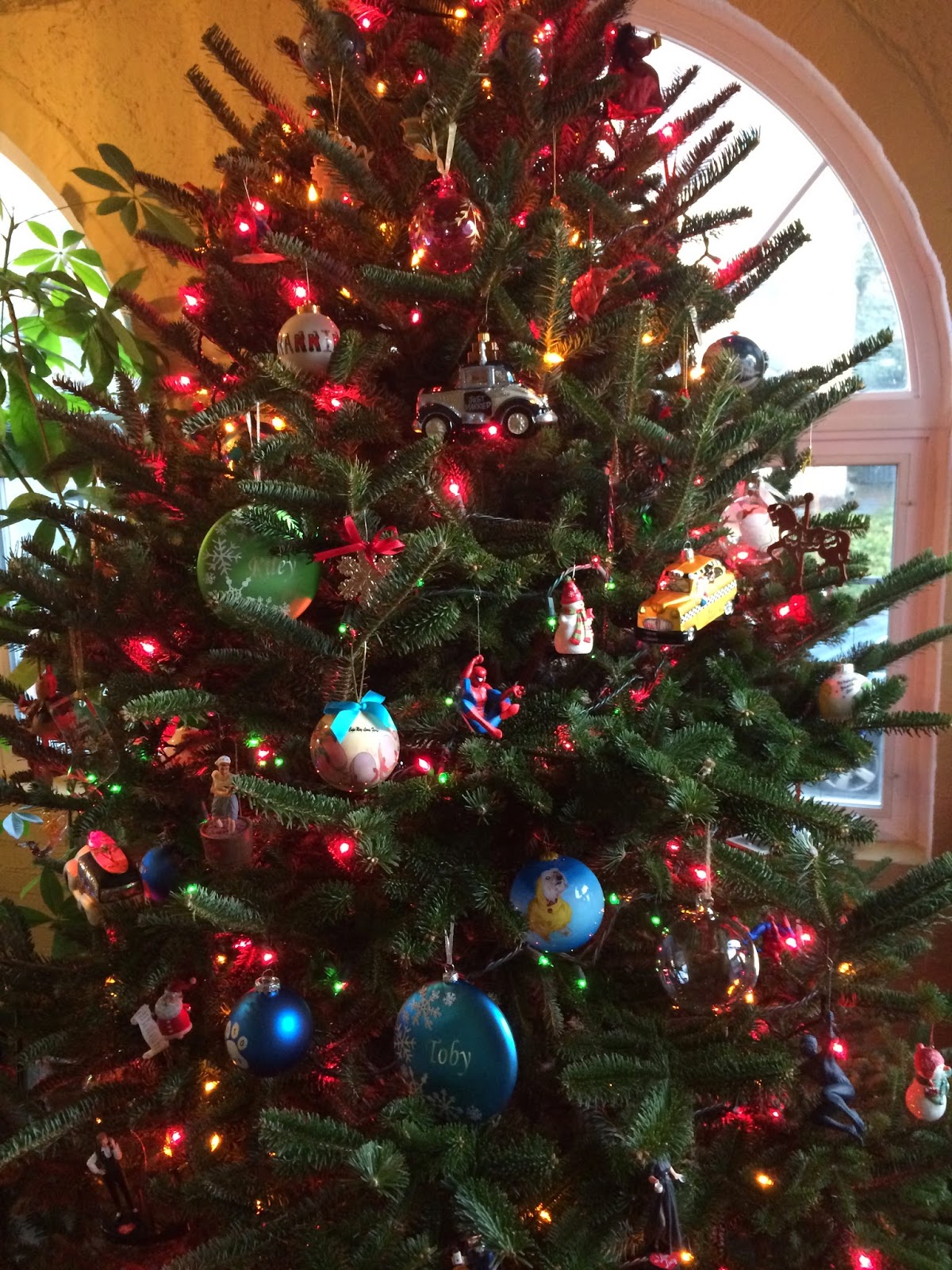 
I hang simple papier mâché ornaments from IKEA which I bought back when I was starting out and money was tight. While moving forward is important, I keep them and hang them each year to remind myself of where I came from, of how far I have come. There is an ornament an ex-boyfriend bought at a thrift store our first Christmas together. It had been his first real Christmas. I keep it to remind me of the joy that first Christmas, of how much we had loved each other, of how hurt I was when things fell apart but mostly to remind myself that I survived, moved on; I keep it to remind myself that broken hearts mend. 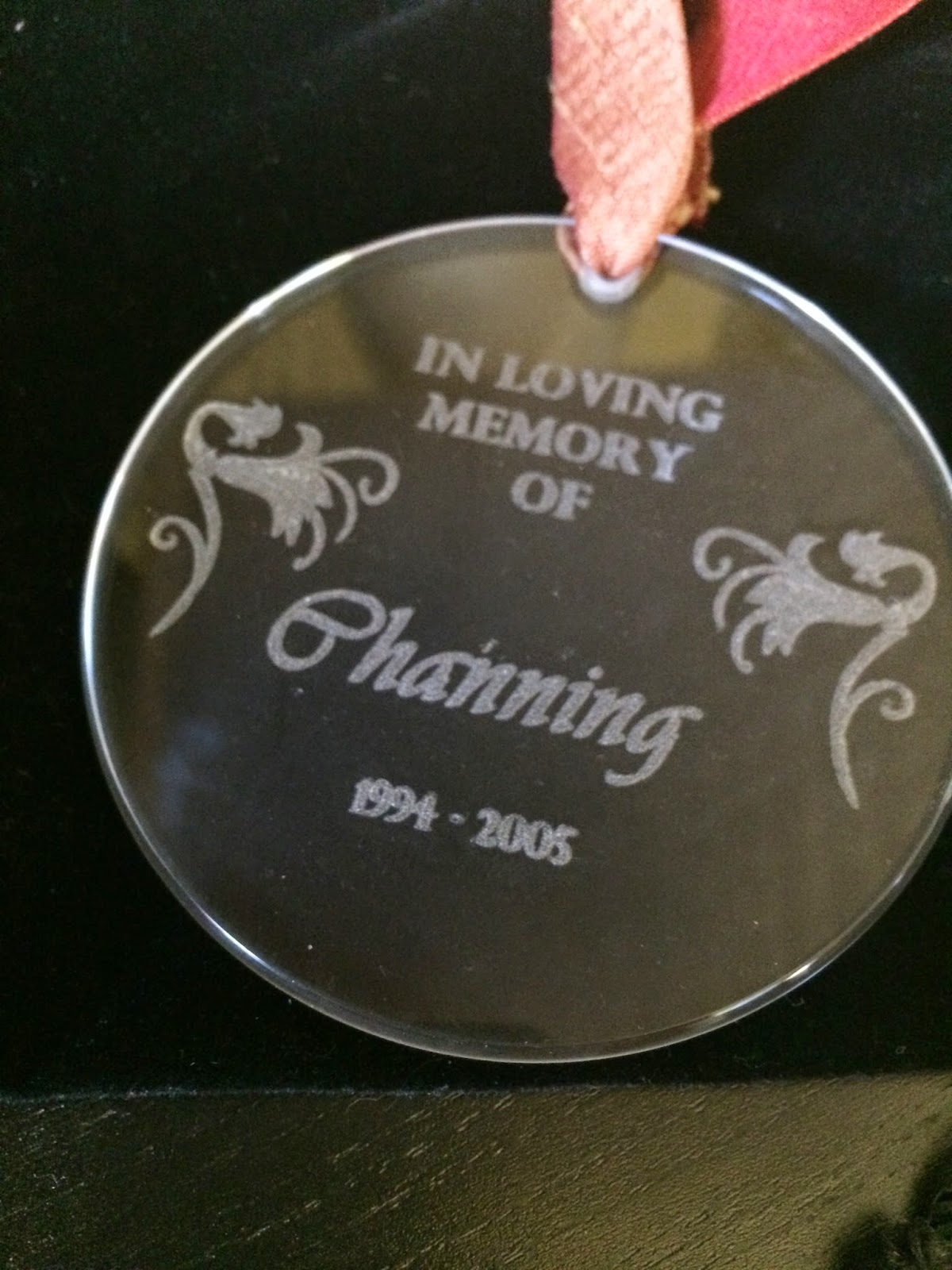 There’s an ornament from Channing’s, my first dog’s Christmas. Each year, I bought an ornament for him. The final ornament in 2005 is a memorial ornament. I did the same thing with our next dog, Coco. Last year I added her memorial ornament. I hadn’t thought about that aspect when I started buying ornaments for our dogs. Now each Christmas season begins with tears. But that’s life—into every sunny garden, rain must come.
This year, Toby got a new ornament, his tenth, and Riley, who’s only been with us since August, got his first one. I got a Rolls Royce ornament piled high with luggage and emblazoned with “Just Married” on the tailgate because Stanley and I got married in June. I picked the Rolls Royce because we fell in love with the vintage Rolls Royces at the Radnor Concours this fall. Already I worry that in years to come, I will remember getting married but won’t remember the significance of the Rolls Royce.
Then there’re the Spider Man and I Love Lucy ornaments my brother gives us each year because Stanley likes Spider Man and I love Lucy. My brother and I have almost every episode memorized.
Christmas, as you may have guessed, is my favorite holiday. So when my publisher approached me about contributing a story to a planned holiday anthology, I knew instantly that I would write about Christmas.

When I started writing,“The Christmas Present,” I knew it would be informed by my own truth as all of my writing is. I hit upon the idea of giving Aidan a Christmas tree, filled with memories as my own is. But, in Aidan’s case, the ornaments on his tree mark a parenting failure that he, in his innocence, assumes is his failure:


“Oh! Clive!” You’re here,” Aidan said stepping into his dorm room and finding Clive, his father’s assistant, inspecting his Christmas tree. How typical of his father to send his assistant, his fixer, he thought contemptuously.
Clive turned to look at him. A slender young man, Aidan was striking, with eyes green as new money, and long pale silky hair; there was something tentative about him, like candlelight caught in an evening breeze. Aidan held in his hand a small ornament. Clive could see it was a reverse glass painting of his school—this school—a Christmas tree at its front gates, its name and crest emblazoned across the top.
Aidan gestured at the ornament in his hand. “I stopped to buy this. It seems silly now. I should probably take the tree down.”
“No,” Clive said. “Go ahead and hang it. Someone can take the tree down later.”
He hung the ornament, stooped to plug in the lights, and stepped back to survey the effect.
Earlier, Clive had inspected the tree and had been surprised to see the tree itself was less a celebration of the season than a sort of memorial to the past, to loss. The only ornaments on it were the awkward, childish ornaments he had made with Nanny and which had never been allowed to hang on the family’s glamorous tree; others commemorated lost pets, schools he had attended, nations and islands and continents his parents had been to without him. Watching Aidan, now blue, now green, now red, Clive cleared his throat, embarrassed to see something both heroic and tragic in him.


I knew from the beginning that the proceeds from “The Christmas Present” (as well as from the anthology itself) would go to The Trevor Project, so I wanted the main character to be reflective of the demographic The Trevor Project serves—LGBT youth between the ages of 12 and 24. At the time the homelessness of our LGBT youth was very much on my mind-- close to a quarter of all homeless in the nation are under the age of 18, and of those 30% - 40% are estimated to be LGBT. So while Aidan isn’t physically homeless, he is in an emotional sense homeless, displaced, away:


Flipping idly through the pages of People magazine, he came across a picture of his parents at some fête. His mother, pale, delicate, was resplendent in jewel tones and diamonds; his father, in requisite tuxedo, was equally dazzling, his silver hair swept back, his eyes glittering like pieces of ice. Surrounding them were other couples, the women equally fashionable and bejeweled, the men escorting them equally somber in black, looking preoccupied by other things, other thoughts. With a wave of sadness, Aidan realized theirs was a world he’d never know. He closed the magazine as the pilot announced their imminent landing.
Recently, I came across a reader’s review which called “The Christmas Present” “depressing.” As the story’s writer, I don’t think that is a fair assessment. There is a happy ending of sorts but more than writing an uplifting, all is joy kind of story, I wanted to write something that recognizes the fact that not all of our LGBT youth have “happy” stories. The whole point of the story is that there are allies out there, and that we can—all of us—choose, at some point, to rewrite our stories to give them the ending we dream of, that we deserve.
To learn more about LGBT homelessness in Philadelphia and what is being done to combat the problem. Click here.
To learn more about The Trevor Project, click here.
To buy “The Christmas Present” and support the Trevor Project, click here.
To learn more about the Boughs of Evergreen anthology, click here.
Christmas Larry Benjamin LGBT short stories the Trevor Project writing