Welcome to Wednesday Briefs―a blog hop where authors post 500-1000 words of free flash fiction every week.
In my books, I write about men in love but we all know that love's road isn't always pretty and well-lit and paved. Sometimes it is dark, strewn with rocks, lined in thorns, spraining ankles and drawing blood. In my flash fiction, I sometimes wander down those other roads.

Felix unlocked the gate remotely. Jason opened the front door and stepped into cool of the hall, a shadow obscuring his face. He looked up, and seeing Felix at the top of the stairs he seemed to falter—it was the tiniest hesitation and in a moment he was cloaked in his usual blistering bravado. “Hey,” he called. “What happened? You never lock the gate.”

Their cat, Rover, who had been roaming the upstairs hall with feline grace, now rubbed himself against Felix’s 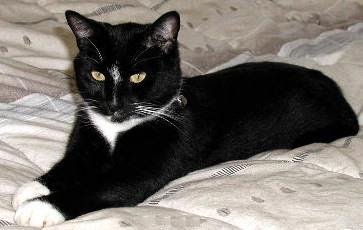 leg. He was a beautiful cat. Jet black, with a splash of white across his chest, he was elegant as a tuxedo.

“Where were you?” Felix demanded.
Jason ignored the question, instead addressing their cat. “Rover, come.” Usually Rover came when called. Now, he looked from Jason to Felix and back again.
“You want him?” Felix asked. He reached down, scooped the cat up, and flung him down the stairs at Jason.
Startled by the hissing, falling cat, Jason cried out “Oh!” and raised a hand in defense. Rover, landing on Jason’s shoulder, scrambled to the ground screaming in protest.
A stealth bomber of a headache arrived on the horizon. It’s pilot, tiny, malevolent, black with purpose, zeroed in on its target and gave full thrust to the engines. The distance between him and Felix shrank. Felix’s skull throbbed. His stomach heaved. Bile burned his throat like chemical warfare. The plane was directly overhead. The roar of the engines was so loud its sound took on physical dimension.
Jason was suddenly in front of him, pulling him into his arms, cradling his head between his neck and shoulder. Moving them, sideways like a crab, Jason led them to their bedroom, all the while whispering in Felix’s ear, his tongue drawing circles around the delicate shell.
The plane swung suddenly around, in a high graceful arc, and streaked back across the horizon whence it came. Felix was left damp, limp, queasy from its noxious fumes, but alive. Wonderfully, vibrantly, alive. He stretched luxuriously, listened to Jason singing in the shower.
Jason’s phone started buzzing. Lazily Felix reached for it, saw a text message flash onto the screen.
A large, black English pram rolled over his foot and came to a rest on his instep. All curiosity and caring, he leant over to peek inside. He recognized the stealth bomber from earlier, impoverished though he was in his current incarnation. A small pudgy hand, jaundiced with spilled tapioca, reached up and poked him in the eye. Oh clever headache!
He stared at the avatar uncomprehending for a moment. A pair of large, very large, breasts. And a name. He read the message:
Hi! Last night was awesome! Can’t wait to see you today! For more of the same? Text me when you’re ready for our swim.
The malignant creature in the pram, having already poked him in the eye, began slapping him with startling regularity. Then it kicked him in the head with a rather large foot.
“That for me?” Jason asked standing at the foot of the bed, his shower slick hair swept back from his high forehead.
“Yes.” Felix handed him the phone.
Jason read the message and tossed the phone casually on the bed. “That was Misty. I told her we’d go swimming today.”
“In my pool?”
Jason looked at him defiantly, “Yes. In your pool.” He reached for a pair of underwear. Stepping into them, he added, “We’ve swam in it before. We’ll swim in it again.”
“No, you won’t.”
Jason glared at him. Felix held his gaze, a vein throbbing in his temple.
“Fine. I’ll take her somewhere else!”
“Don’t,” Felix said. A single word, full of warning.
Jason dropped his underwear, and straightened up, eyes blazing. “You don’t own me. You don’t own this,” he said. Grabbing his dick and squeezing, he shook it wildly. Across the room Felix closed his eyes against the vulgarity. When he opened them again his black eyes had gone gray and cloudy. Jason was reminded of a charcoal fire going out. He shuddered slightly and continued dressing.
Dressed, he grabbed a fistful of money off the bureau and stuffed it angrily in his back pocket, without looking at Felix. “I’ll be back after dinner,” he threw over his shoulder as he stormed from the room.
Felix sat heavily on the edge of the bed and reached for the phone. A utility truck pulled to the edge of his consciousness and a slender well-built youngman with well-muscled arms hopped out and proceeded to jackhammer the top of his skull. The racket was debilitating and he had to pause to catch his breath before speaking. He was about to ask the impossible, but he was rich. Very rich. It would be done.
***
The house shimmered like a mirage, gold with distance. It seemed angry, closed in on itself. Unwelcoming, though its front door stood open. As Jason bounded up the front steps he could feel the cool beckoning fingers of air-conditioning. “Felix! I’m home!” His momentum propelled him into the middle of the great front hall, before he realized something was wrong. His words echoing, flung themselves at him in ambush. He staggered backwards.
“Felix! Feeeliiix! “
His words, traitors turning against him, chased him as he ran from room to room, each successive room as bare and white as the one before it.
***
Jason was arguing with Felix. Though his lips moved frantically no sound came out.
Felix could see one of his headaches bearing down on him, like an 18-wheeler, grinding gears, struggling over the crest of the hill. Felix realized he was dreaming. With a whistle of brakes, the truck came to a dead halt and began to roll backward down the hill, out of sight.
Felix woke with a start. Something was different. He had no headache. Could this be? Cautiously he turned his head from side-to-side on the pillow. Nothing. From the foot of the bed Rover watched him curiously through luminous green eyes. Felix sat up, slowly. Still nothing. Boldly, he shook his head. Silence. Not even the distant rumble of a diesel engine.